A Trip Back in Time

Egypt is known as the cradle of civilization and is famous for being home to Millennia-old monuments including Giza’s colossal Pyramids and the Great Sphynx.  This is a country that links northeast Africa with the Middle East is one of the most visited countries in Africa.

I was fortunate to have spent three days discovering the wonders and beauty of this country, and am grateful to have gained a deeper appreciation of its rich history, culture, and own faith.

After landing safely at Cairo International Airport via Turkish Airlines, we were greeted by our travel guide at the Arrivals section to kick off our tour.  Our first destination was the Egyptian Museum, also known as the Museum of Cairo, located around a 40-minute drive from the airport.

The Egyptian Museum is a perfect welcome to first-time visitors of the country, presenting an extensive collection of ancient Egyptian antiquities and artifacts that speak of its esteemed history and culture.  The collection is so vast that our guide said it would take a month or more to see all the artifacts!  Since we only had an hour or so to spare, our guide showed us the highlights of the museum, including Tutankhamun’s Mask made of 11 kilograms of solid gold and considered one of the most famous works of art in the world. All artifacts were authentic, except for the Rosetta Stone which was a replica of the original housed in the British Museum. The Rosetta Stone is significant because it contains one decree in 3 languages, Egyptian hieroglyphics, Demotic and Greek. The presence of these 3 languages was key in allowing scholars to learn to read ancient hieroglyphics. We also saw a lot of mummified remains, including mummified pets! Another item I found interesting was a group of artifacts from an Egyptian princess who turned out to be the same one who found Moses.

We closed the day with a visit to the Hanging Church, more officially known as the Church of the Virgin Mary.  The Hanging Church resides at the heart of Old Cairo, built atop the southern gatehouse of a Roman-built Babylon Fortress, and gets its name from the fact that it’s central part is suspended over a passageway.  This unique location gives the church the impression of hanging in mid-air. 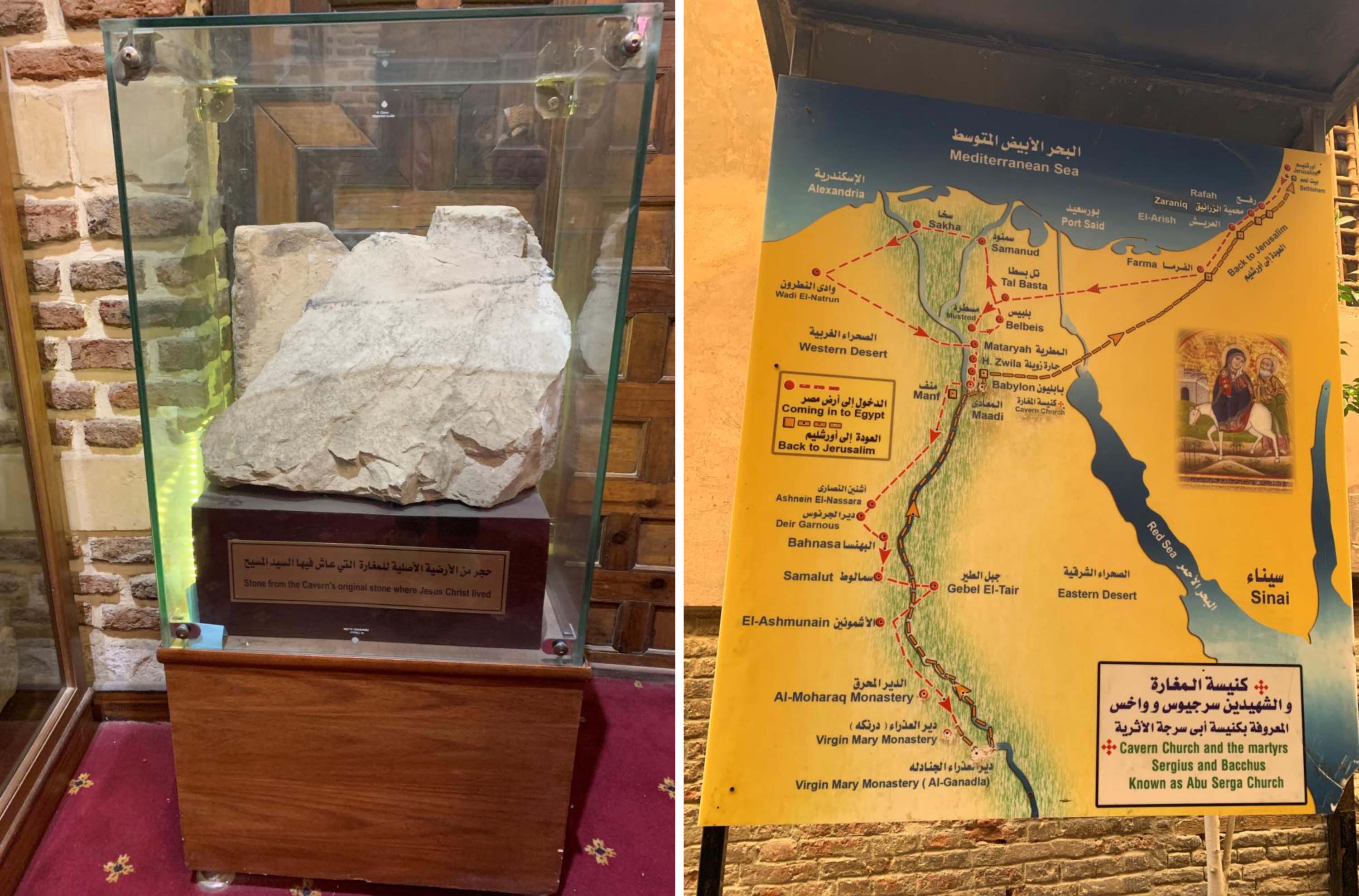 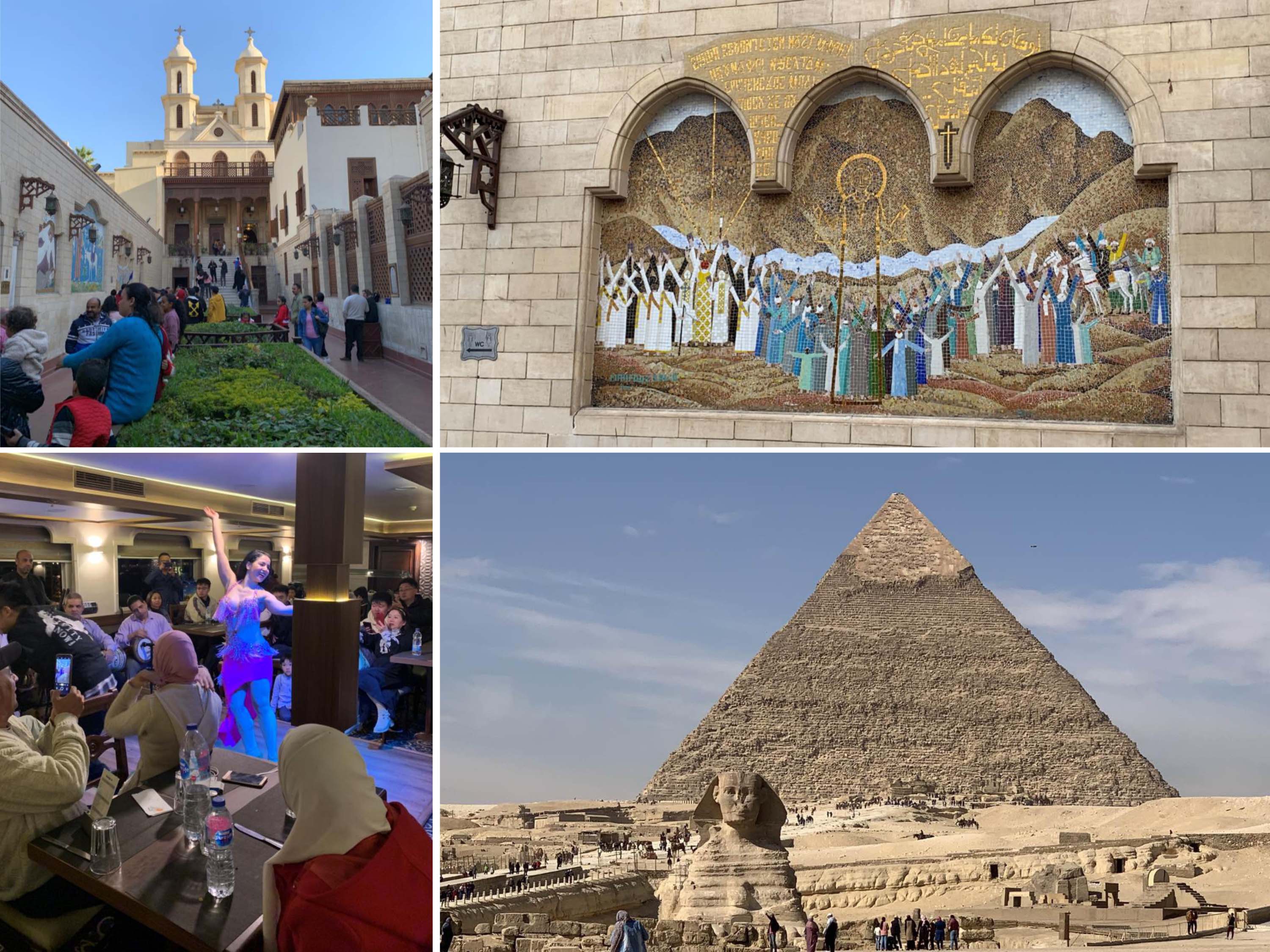 The following day, we were driven to the famous Pyramids of Giza.  There are numerous pyramids of all sizes all over Egypt and I was surprised to learn that they are all of them are tombs to different Pharoahs. The sizes of the pyramids vary, depending on the wealth and power of the Pharoah who had them built.  The Pyramid of Khufu, also called the Great Pyramid, is the largest of the three pyramids of Giza. It is also oldest of the seven wonders of the world, and the only one to remain largely intact.  We had an amazing view of the pyramids from a distance. When you visit, you don’t realize how big the pyramids are until you are standing in front of them!

The location of the pyramids is quite a distance from where the Sphynx is located.  It was good that the tour provided a car that allowed us to ride around the huge complex and have a better appreciation of the monuments.

Later that evening, we were taken for dinner on a Nile River Cruise that featured a belly dancer and a whirling dervish for entertainment. It was my first time to see this type of entertainment live and the whole audience certainly enjoyed the show.

For our third and last day in Egypt, we drove the Exodus route to travel from Cairo to Taba, an Egyptian town bordering Israel.  The ride took eight hours. In the bible, this route took the Israelites forty years to complete.  The guide told us if you look at the map, there was a more direct route that could have taken less time.  However, they think that the Lord allowed the journey to stretch for 40 years because: (1) there were Egyptian soldiers along the more direct route and it was safer to take the longer way, (2) God wanted the Israelites to learn patience and to appreciate the help of God, and (3) forty years is enough time for the previous generation to die out so that the Israelites who would live in the Promised Land were a “new” generation and didn’t have the bad habits of the previous generation.  An interesting theory worth pondering on during the long trip.

We finally arrived in Movenpick Taba which is a resort hotel located directly on Taba Bay overlooking the Gulf of Awaba. Interestingly, the Gulf of Awaba is the meeting point of four countries and provides visitors with views of Jordan, Israel, and Saudi Arabia.  We spent the night here and checked out early the following morning to begin our tour to our next destination – Jordan.

Looking back on my short stay in Egypt, I couldn’t help but remember countless stories I’ve read in books, movies and the Bible about this ancient civilization. Seeing these places truly brought history to life and I gained a greater appreciation of the grandeur of this famous civilization.